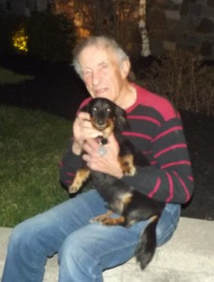 AAC founder Sid Kreitzberg.
Animal Adoption Center was founded by Sid Kreitzberg and Carole Shankin in 1990. Sid is Chairman Emeritus of our board of trustees. Sid and Carole are still active in the life of the shelter.

In 1985 Sid and a group of volunteers were traveling daily into Camden to feed sick and starving dogs and cats. At the time the city was overflowing with strays, and Sid and his friends set up feeding stations throughout the city to meet the need. His group eventually formed the non-profit Friends of Camden Animal Shelter (FOCAS).

FOCAS learned that the SPCA in Lindenwold was planning to sell their facility on Berlin Rd. Camden County sold the building to FOCAS for one dollar.  FOCAS agreed to continue to rescue animals from Camden County communities, and reopened as the Animal Adoption Center (AAC) in 1990.

The first board of trustees designated the shelter as a no-kill facility, and it remains so to this day.  Their decision predated the start of the modern no-kill movement in San Francisco by three years, and was rare in the field of animal welfare at the time.

AAC expanded throughout the 1990’s, improving both the property and infrastructure. The shelter can comfortably house 38 cats and 42 dogs, and has found homes for more than 18,000 animals since opening. Sid notes, “We’re proud of our success rate in matching pets with people. With the support of generous donors, adopters, and volunteers we will continue to provide rescued animals with housing, medical care, and adoptive homes for years to come.”
Donate Now
Animal Adoption Center is a 501(c)(3) charitable organization, Federal Tax ID: 52-1720581. All donations are tax deductible to the fullest extent of the law.